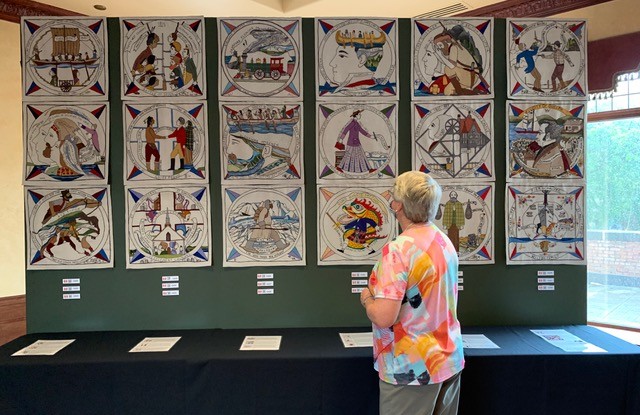 Tulip Tree Needlearts Guild celebrated its 20th anniversary with a display of needlework art by the members a presentation to the public of the Baldoon tapestry community project started in 2019.

Recently, from October 12 to 29, 2021, the guild display, “Not Your Grandmother’s Needlework,” was at the Mainstreet Lounge in the Capitol Theatre, and highlighted innovative embroidery and needlework. They were very pleased with the turnout and support from the community.

As a member guild of the Embroiderers’ Association of Canada https://eac-acb.ca/ members have had a unique opportunity to take classes, attend seminars, and tap into online learning to gain insight into the latest techniques. In addition to embroidery and needlework, the members do beading and fabric embellishment.

Community needlework projects sponsored by the guild hang in both the Ronald McDonald houses in Windsor and in London. Another project was donated the local Women’s Centre in Chatham along with one that depicts gingko leaves donated to the Cultural Centre. Each member picks a section of the project to embroider so that the work is a communal effort by the club.

In 2019, Tulip Tree Needlearts Guild began stitching a needlework panel inspired by the Scottish Diaspora tapestry. In Scotland, the project began to collect panels done in needlework to represent how the Scots had gone forth and colonized all over the world. For more information on this unique venture look at the website to see all the colourful and exciting panels that were collected: http://www. scottishdiasporatapestry.org/

In Southwestern Ontario where the guild is located, there was a settlement called Baldoon, near the current town of Wallaceburg, that was sponsored by Lord Selkirk to settle people from the Highlands of Scotland who had been forced off the land. This was the inspiration for the guild’s latest community project.

The tapestry is divided into two parts using the ship, the Oughton, that brought the people to Canada as the dividing line between the great expectations of a fertile land with many sheep envisioned by Lord Selkirk on the left and on the right the harsh reality represented by dense marsh.

Lord Selkirk is seen in profile looking left to his vision of a land of plenty for his settlement. Sheep and grassland with a small marsh to provide game for the tenants was his dream.

To the right is a larger marsh with seven mosquitoes flying above it to represent the seven early settlers who died of malaria. Above the marsh flies a goose representing the Baldoon mystery, a curious piece of folklore involving shape changing and baffling events from the early days of the settlement.

Below the ship, in blue, the various bodies of water are represented. The darkest wedge of sea is reserved for the Atlantic crossing during which one death occurred.

Around the circle are the names of the places that the settlers visited on their epic journey. The date 1804 was the beginning of the settlement and 1818 the date that the Selkirk estate of Baldoon was sold. Lord Selkirk died in 1820.

The local stitchers were honoured when the tapestry was accepted into the collection in Scotland. Before being sent to Scotland it was on display at the Capitol Theatre at the guild’s anniversary event this past October, and will be part of an exhibit at Guelph, Ontario in November.

As part of the anniversary event, the committee in Scotland sent the 37 panels done by Canadian stitchers on the Scottish influence on Canadian history to be displayed along with the Baldoon tapestry. 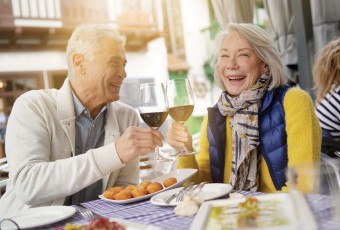 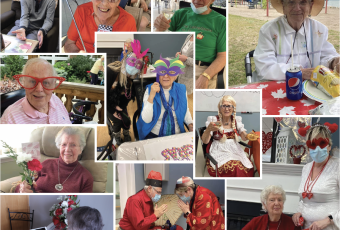 Here’s what has been happening at St. Andrew’s Residence!  We worked together to reinvent how we delivered programs. We have…